In Colonial America, there were many fighters that fought for the freedom of this country. Among the farmers and tradesmen on the battle lines were black slaves who fought with the hopes of gaining their freedom.

One of the 5,000 blacks and free men who fought alongside the farmers and tradesmen was Peter Salem from Framingham, Massachusetts. For many years he was a slave to Captain Jeremiah Belknap. He was then sold to Major Lawson Buckminster. Just before the start of the Revolutionary War, Mr. Buckminster set Peter Salem free so he could enlist in the militia and fight in the American Revolution.

Peter Salem served under the Framingham militia and was part of Colonial Nixon's Regiment. At the battle of Bunker Hill, Peter was ordered to support Colonial Prescott. As the militia was faced with some difficulties, the British Major Pitcaurm, seeing victory was near, said: "The Day is Ours!" Peter Salem shot the Major, and Major Pitcaurm fell into the arms of his son. He would later die in a house in Boston.

The death of the British Major was an inspiration to the colonial militia and gave hope to those fighting for the American Revolution.

Life after the Revolutionary War

Peter stayed with the Framingham Militia throughout the war. He fought at various battles including Saratoga and Stony Point.

After the war ended, he headed to Leicester, Massachusetts. He lived in various parts of town where he did odd jobs including farming, making and mending baskets and fixing chairs.

Peter Salem didn't really do well in his business and resorted in support from the local government. The town of Leicester sent him back to Framingham where Peter lived his final days in a poor house.

Peter Salem died on August 16, 1816. He was buried at the Church Hill Cemetery (Old Burial Grounds) in Framingham, not far from the Belknap and Buckminster farms where he served as a slave. 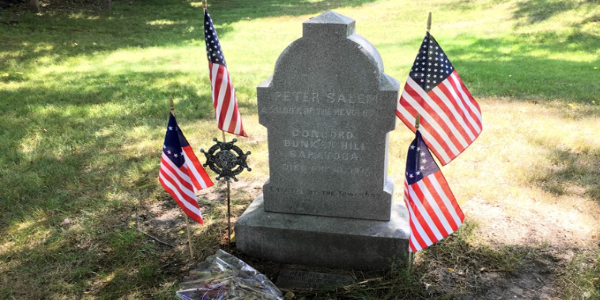 Note: No one knows exactly where Peter Salem body was buried. The monument was placed in the center of an area where unmarked graves were kept.

Tips on finding the monument at Old Burial Ground:

At the Boston Museum of Fine Arts is a painting of the Bunker Hill, called "The Death of General Warren at the Battle of Bunker Hill." In the painting, you can see a black man standing behind Joseph Warren.

Many historians suspect that the painter, John Trumbull, had painted Peter Salem there as a tribute to his actions at the Battle of Bunker Hill.

In Leicenter, Massachusetts, there was a small memorial to Peter Salem at his former homestead. His last residence was on Rochdale Road. After he died, the road was renamed "Peter Salem Street."

For many years there was a small stone monument cemented together with the inscription, "Here Lived Peter Salem, Negro Solder of the Revolution." The monument disappeared many years ago. (45 Peter Salem Street is where I believe the monument was.)

In 1985, the House of Representatives approved a bill to erect a monument to the black patriots who served under George Washington and Marquis de Lafayette. The Senate delayed the vote because of dispute of where the monument would be placed.

After 30 years, the National Park Service suggest a small strip of land near the Department of Agriculture, at the corner of 14th Street and Independence Avenue. President Obama signed the authorization into law on September 26, 2014.

The National Liberty Memorial is still gathering funds for the Memorial, visit their website for additional information.