This single gravestone has 21 family members listed, six of them were children of Francis and Anna Archbald. 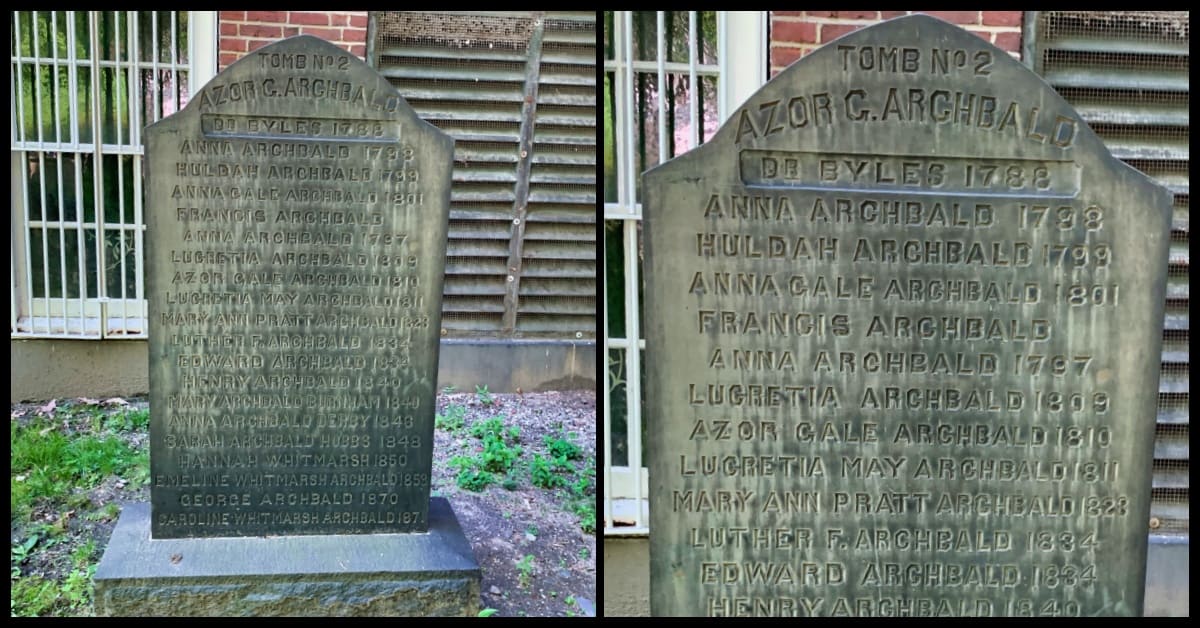 Dr. Byles is actually Mather Byles. He was a high ranking clergy at the Hollis Street Church (Congregational) He graduated from Harvard College and received his doctoral degree from the University of Aberdeen in Scotland.

During the Revolution he was an advocate of British rule. Despite his loyalty to the British, he was captured during the British Occupation of Boston. He was under house arrest while the British occupied the town.

It's unclear on why he was arrested - other than his refusal to leave his home and the Hollis Street Church.

Side Note: I am not sure why Mather Byles full name isn't on the gravestone and why his name isn't listed on the Official Granary Burying Ground Cemetery Records.

Edward Archbald and Francis Archbald were two brothers that had some minor role of a series of events that eventually led to the Boston Massacre.

According to the Boston Gazette, a publication that reported on the events of the American Revolution, this is what happened:

On March 5th, 1770, four boys - Edward Archbald, William Merchant, Francis Archbald, and John Leech arrived at Cornhill (A Street in Colonial Boston - which is where City Hall is today.)

As the four boys were walking down a narrow alley, Edward Archbald bumped into a British soldier sword. He asked the soldier to move the sword so others wouldn't bump into it. The Solder turned around and hit Edward on the arm and poked the sword at William Merchant.

William hit the soldier with a stick he had in his hand. One of the other soldiers ran to get an assistant.

One of the solders that came to help chased Edward in the alley and corned him. The soldier then "laid him over the head with the tongs."

This commotion attracted other people to see what was going on. The soldiers took the boys over to the nearby barracks and stood by them. After a few moments, more people showed up - some with clubs and bayonets.

After a while the boys left - since they didn't have the fighting equipment other had.

The ensuing mob would later start harassing the British. The British would later fire on the mob killing three instantly and two others died a few days later.

The Archbald gravestone is in the back left corner of the Granary Graveyard - along the brick wall.