Know Why? Because the IRS says so:

Though giving money to your candidate of choice is a great way to get involved in civic discourse, political donations are not tax-deductible. According to the IRS: "You can't deduct contributions made to a political candidate, a campaign committee, or a newsletter fund" 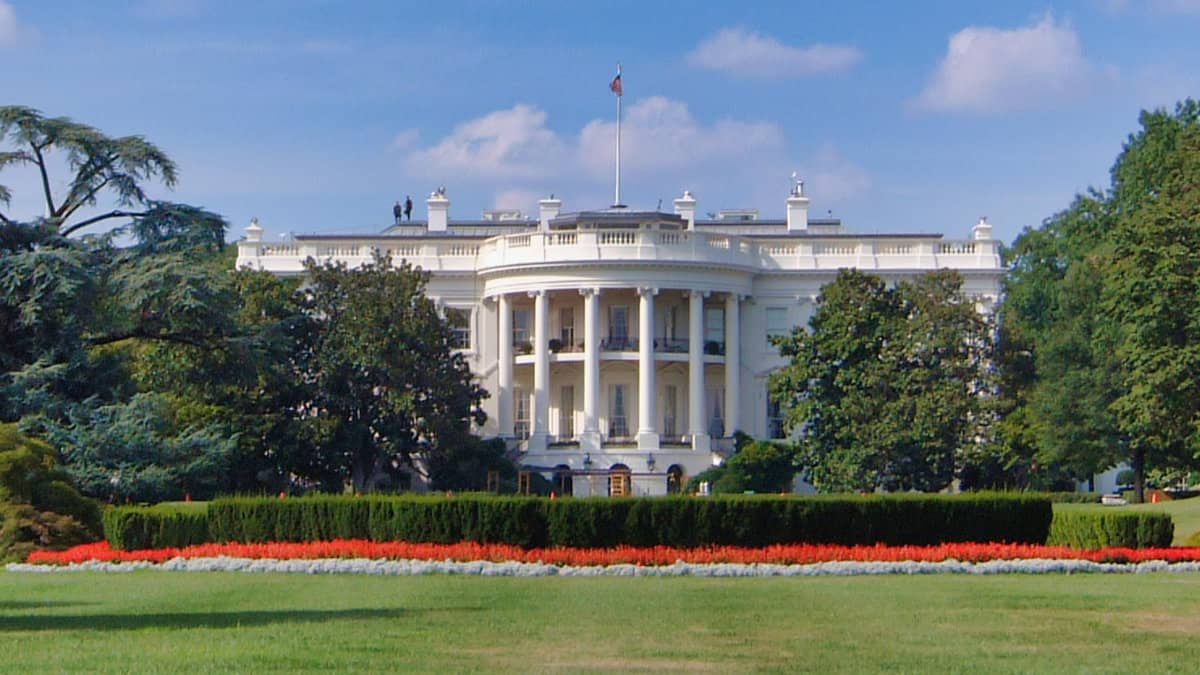 There's no election in the world more expensive than the Race for the White House. Learn where the candidates are raising their money-the industries, the states, and metro areas-and how they're spending it. You can also find data here for past presidential contests.

The Election Cyle pretty much kicks in high gears now that it's past Labor Day. The best place to find out the latest polls about the 2020 Democratic Presidential Nomination is RealClearPolitics

You can learn whos is doing well, and who's most likely to drop out.

What I find amazing is that while Joe Biden has a commanding lead in all the presidential polls, but if you look at the OpenSecrets.com stats, you'll see that he is in 5th place in fundraising.

Fresh off of Donald Trump win of the White House, I thought it would be interesting to see how Framingham performed against the actual winner of a major presidential election.

Framingham is clearly a blue town, at least that's what it has shown on every election result since 1972. The only year that the town went Republican was in 1984.

Here is a table highlighting how the town votes

Data used in the above table came from the Massachusetts PD43+ Elections Statistics Database.

Filed under the "Framingham" and "Political" categories. 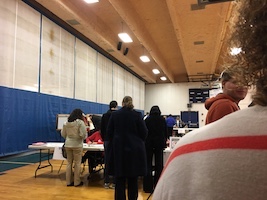 Today is Election Day in the United States. Many voters have already casted their ballets via early voting.

In Framingham, Massachusetts, there was a long line at the Keefe Technical School which is our local polling place. It took 25 minutes to cast our votes this morning.

There was someone that cut in front of me in line that didn?t even know which polling place they should be in. Take some time and learn where your polling place is, and plan to visit there often! It?s 2016, there?s plenty of resources available to help you find your local polling place.

Reguardless of who wins the Presidential race, it will be a historical win.

I updated American's Creed from the Boy Scout Manual, I am sure that William Tyler Page wouldn?t object to this version.

I believe in
the United States of America as a
Government of the people, by the people, for the people;
who just powers are derived from the consent of the government;
a democracy in a republic;
a sovereign Nation of many sovereign States;
a perfect Union, one and inseparable;
established under those principles of freedom, equality, justice,
and humanity for which American patriots sacrificed their
lives and fortunes.

I therefor believe it is my duty to my country
to love it;
to support its Constitution;
to obey its laws;
to respect its flag;
to fully protect it?s national secrets and
to defend it against all enemies.

The original American Creed was developed by William Tyler Page in 1917. It is a brief, clear statement of American traditions and ideals, as expressed by leading American statesmen and writers. 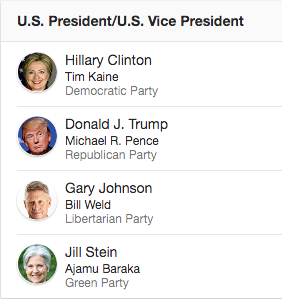 This year's Presidential election is pretty crazy and people are starting their early voting. Some people are even posting selfies of them at the voting booth.

While selfie sticks haven't been ban in some voting area, some schools/buildings have banned them for security purposes.

The Commonwealth of Massachusetts doesn't have any laws against taking any type of pictures at the voting area.

You can follow along those that have publically announced that they voted:

The American's Creed from the Boy Scout Manual. This is something to remember as we get closer to election day in the United States:

I believe in
the United States of America as a
Government of the people, by the people, for the people;
who just powers are derived from the consent of the government;
a democracy in a republic;
a sovereign Nation of many sovereign States;
a perfect Union, one and inseparable;
established under those principles of freedom, equality, justice,
and humanity for which American patriots sacraficed their
lives and fortunes.

I therefor believe it is my duty to my country
to love it;
to support its Consitution;
to obey its laws;
to respect its flagl and
to defend it against all enemies.

The American Creed was developed by William Tyler Page in 1917. It is a brief, clear statement of American traditions and ideals, as expressed by leading American statesmen and writers.

Key lines to the Creed:

Something to think about today, Patriot Day in the United States:

The following appeared in the Durham, NC local paper as a letter to the editor:

Liberals claim President Bush shouldn't have started this war. They complain about his prosecution of it. One liberal recently claimed Bush was the worst president in U.S. history.

Let's clear up one point: President Bush didn't start the war on terror. Try to remember, it was started by terrorists BEFORE 9/11. Let's look at the "worst" president and mismanagement claims.

Clinton went to war in Bosnia without UN or French consent. Bosnia never attacked us. He was offered Osama bin Laden's head on a platter three times by Sudan and did nothing. Osama has attacked us on multiple occasions. Over 2,900 lives lost on 9/11.

In the two years since terrorists attacked us, President Bush has liberated two countries, rushed the Taliban, crippled al-Qaida, put nuclear inspectors in Lybia, Iran, and North Korea without firing a shot, captured a terrorist who slaughtered 300,000 of his own people. We lost 600 soldiers, an average of 300 a year. Bush did all this abroad while not allowing another terrorist attack at home.

Worst president in history? Come on!

The Democrats are complaining about how long the war is taking, but...

Our military is GREAT! PASS IT ON.

Corporations have taken over the 2016 United States Presidential Elections.

This screenshot of a campaign donation request that I receieved recently: 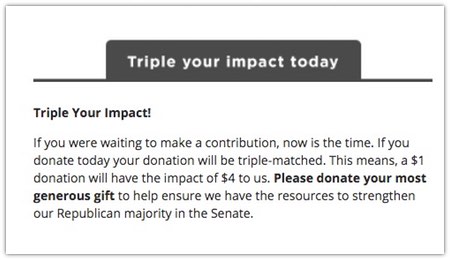 Triple Match? Where is that matching money coming from? Corporations. This is why many people feel that the political system in the United States is out of control.

Don't think money is an issue in this Election? Consider this snip from the Ben and Jerry's website:

$200 may not sound like a lot of money, but in the last presidential election cycle less than ˝ of one percent of Americans made a political donation of more than $200. Donating that kind of cash to a campaign is well beyond what many people and families can afford and if the decision is between funding a politician and buying a month?s worth of groceries, you can bet that food comes first. Besides, since when did free speech get so expensive?

Please support the fight to get the Corporations out of the elections via the 28th Ammendment to the Constituion. The reason why we need a constitution is to overturn the Supreme Court's Citizens United ruling in 2010.

Let the People Vote! Campaign Contributions have gotten out of control. Before we can control the government spending, we need to control the contribution spending.

An audio clip of the debate from the 1996 Republican Presidential Primary debate. I believe that is Pat Buchanan response to the question, "What is your vision for America."

Let me tell you where I stand
You know where I stand
I will fight to be the most Pro-Life President in the history of this country.
I will stop illegal Immigration cold.
There will be no more $50 billion bailouts.
We will end foreign aid
There will be no more American troops in Bosnia.
Downsize our Government.
Cut taxes on the American people
and we will restore the Constitutional Republic of the founding father's dream.
That is a conservative vision and a conservative agenda.
Senator Dole has no vision.
and when there is no vision, the people will perish.

The last line in the speech is a quote from Proverbs 29:18 - "Where there is no vision, the people perish: but he that keepeth the law, happy is he."

Filed under the "Media" and "Political" categories.

This Kasich thing is just getting out of control, here's the latest email from the Romney for President Inc, team:

Friend, nearly every poll shows that both Trump and Cruz will get crushed by Hillary Clinton in the fall.
If we want to win the White House, there is only one Republican candidate who can defeat Hillary: Gov. John Kasich

Here's the pretty chart that they include: 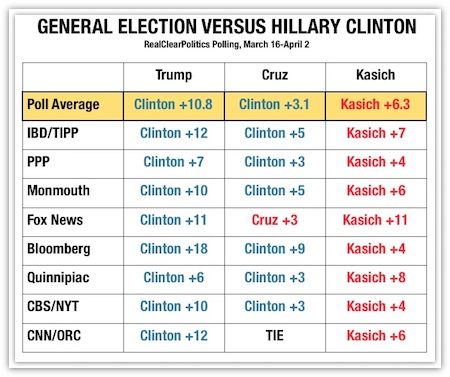 This is the numbers the Kasich team doesn't want you to focus on:

Also in the email is this:

It's mathematically impossible for Ted Cruz to win enough delegates to secure the nomination. His claims otherwise are dishonest and it's time for our Party to unify behind the one candidate who can defeat Hillary.

Ted Cruz has spent millions of dollars attacking Gov. Kasich's record, misleading voters. The truth is, John Kasich has the conservative record that Ted Cruz can only dream about. After all, he is another one-term Senator.

Um sorry, but if it's "impossible for Ted Cruz to win enough delegates to secure the nomination" and he has five times as many delegates than you have...um are you using Common Core Math in your calculations?

Sorry John Weaver, Chief Strategist of the Kasich, the team you are on is fighting a losing battle. One more thing, please stop calling me Friend.

I like how Kasich campaign is playing the spin game, in today's email to investors, they claim that Kasich is the only one that can beat Clinton. 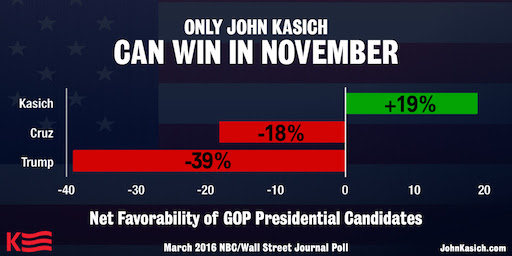 The only problem is that mathmatically he won't be able to win the Republican nomination. Here are the current deligate count:

Not sure why anyone would be donating money to the Kasich campaign. He is a nice guy, has some great ideas, but is a serious long shot at getting the 2016 GOP nomination, let alone beat Hillary Clinton in the fall.