Against the Grain Pizza

One of our favorite pizzas is the ?Against The Grain.? While some people may shy away from it because it?s a Gluten-Free pizza - that would be a mistake.

Apparently people have this notion that gluten-free pizzas taste like cardboard. That is not the case with the ?Above the Grain? pizza. 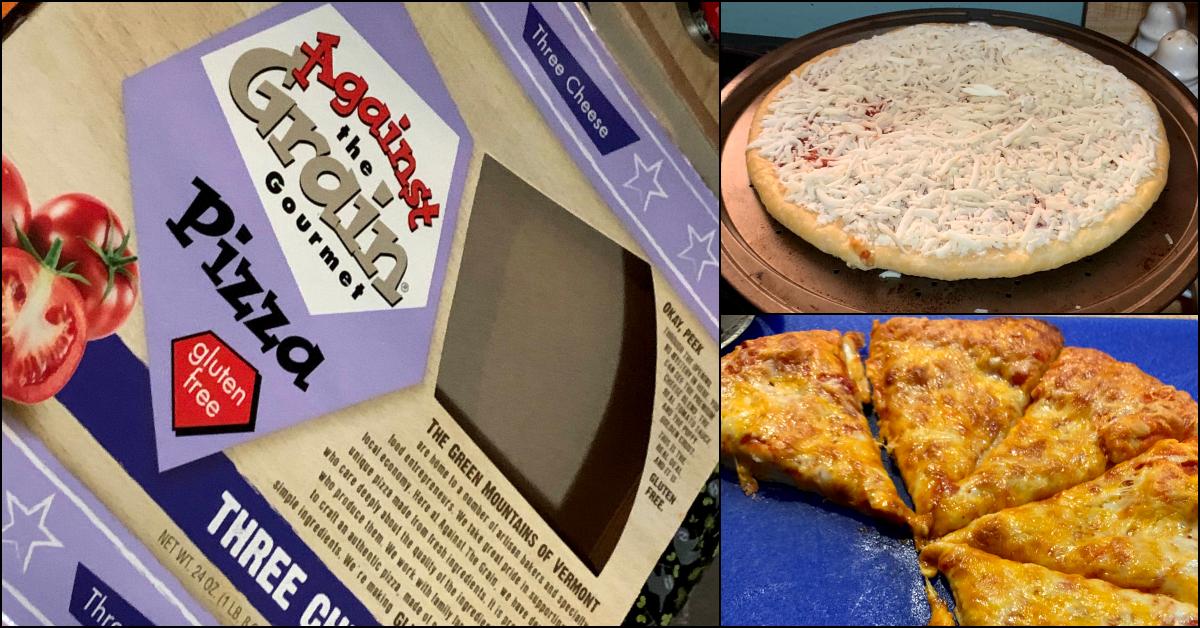 We cook our pizza with a circular pizza pan. We cook it at 400-degrees for about 18 minutes. It?s a bit longer than the directions. We do this so the crust is nice and crispy.

We get our pizza at Super Stop & Shop. They stock it with the other gluten-free items. Usually in a special foods section. It cost about $12 - about the cost of premium pizza that isn?t gluten-free.

You can find them at Wegmans and Roche Brothers.

It?s not available at Market Basket.

This year we found some great new restaurants and new breakfast foods. It was fun coming up with topics and content every week.

In 2020 we'll be going around the City of Boston looking for great gluten-free foods. We'll try to find the best hamburger and pizza place in metro-Boston.

Erica's Ristorante in Ashland, Massachusetts is a small Italian restaurant that has lots of great choices. The dining room was nice and quiet and we didn't have any problems getting a table at 7 pm on a Monday night before Christmas.

Earlier this week we met up with friends and decided to try out the restaurant since we heard that they have gluten-free options.

We asked for a Gluten-Free menu on check-in, the host at the door said that just about anything on the menu can be made gluten-free. The waiter will give us the options. That didn't happen, the waiter only told us what wasn't available not what was available.

They do not have gluten-free pizza crust.

They do not have any gluten-free rolls. Which I felt bad that everyone at the table was munching on bread except for my daughter.

They have gluten-free pasta, so my daughter had the pasta and red sauce.

The pasta was delicious - as she ate the whole thing. Usually, she wants to bring some home, but tonight she wanted to enjoy the pasta.

Erica's Ristorante is located on 78 Front Street in Ashland, Massachusetts. It's located next to the Ashland Public Library.

We had a good experience and certainly put it on our list to return to this establishment.

This weekend we went to Margaritas in Northborough, it was our first visit to this location. We were happy to go here and then head over to Wegmans to do some grocery shopping.

We love going to Margaritas, they have great gluten-free options. My daughter loves the Make Your Own Fajitas with corn wraps.

A few minutes later someone came by with the gluten-free chips and put it on our table. This is what our table looked like: 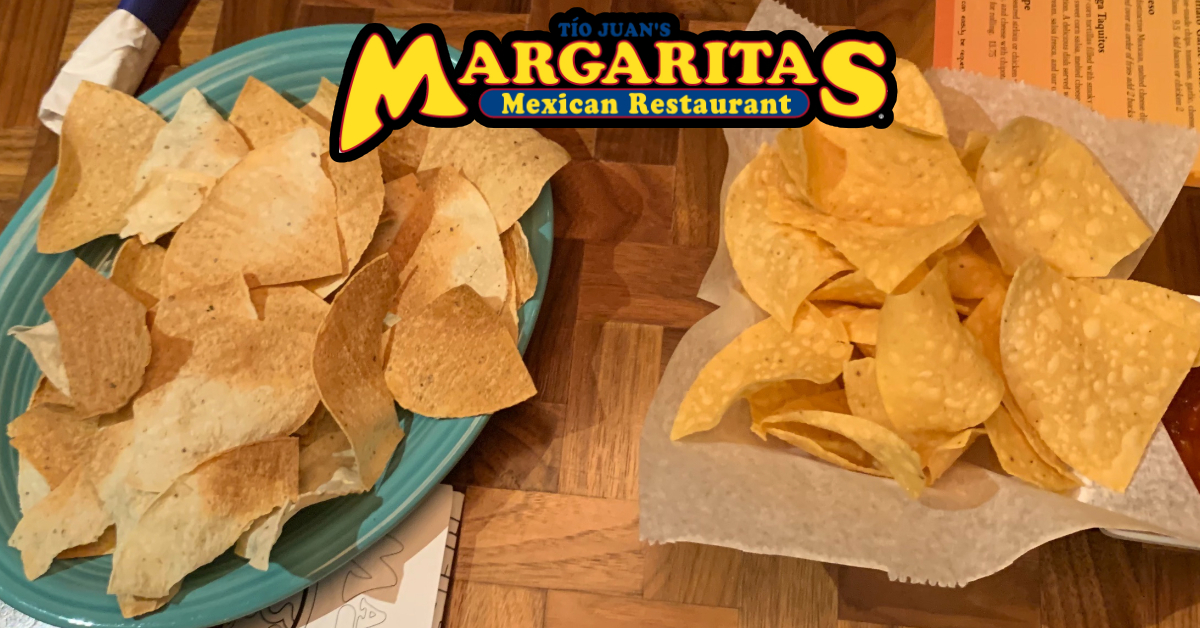 What was strange to us is that the chips looked different. We have eaten at Margarita's plenty of times, but this is the first time that we noticed a significant change between the chips.

I don't know if Margaritas is using a different supplier for the gluten-free chips. It just seemed weird to see the two baskets side by side. (I never took pictures before because it wasn't a noticeable difference.)

Both chips were equally good. (The Gluten-free ones were nicer because they were warmer.)

Let me know what you think. Did Margaritas make some change or is this something unique to the Northborough location.

Supermarkets have been great putting gluten-free merchandise next to each other. They usually put a large sign so people know where to find Gluten-Free items.

Some stores even highlight Gluten-free products when they are placed with other products.

However, Market Basket might have gone slightly overboard with this placement: 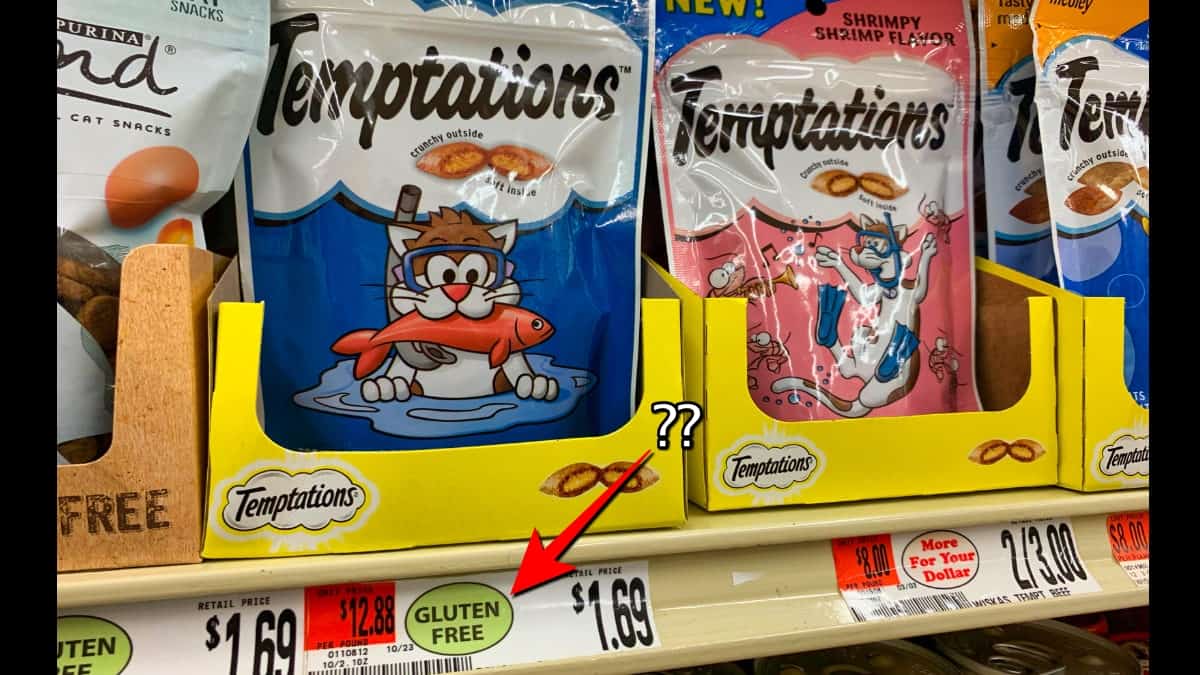 Do you really need to highlight Gluten Free treats?

It seems that putting a "Gluten-Free" on the UPC shelf label for cat food is a bit too much. When I first saw it in the store, my first thought was - "You have to be kidding me."

I get it that some cats/dogs need to eat gluten-free but do they merit a "gluten-free" label?

What do you think?

Put your thoughts in the comments below. Is Market Basket justified to putting a "Gluten-Free" label on the shelf label?

Shake Shack is a popular National burger chain. It's much smaller than the "Big 3" burger companies - as they were born from a small kiosk to become a national success story.

There are seven places in Massachusetts - with most of the locations around Boston and Cambridge.

Recently we stopped at the Boston Seaport location - located across the street from the District Hall. 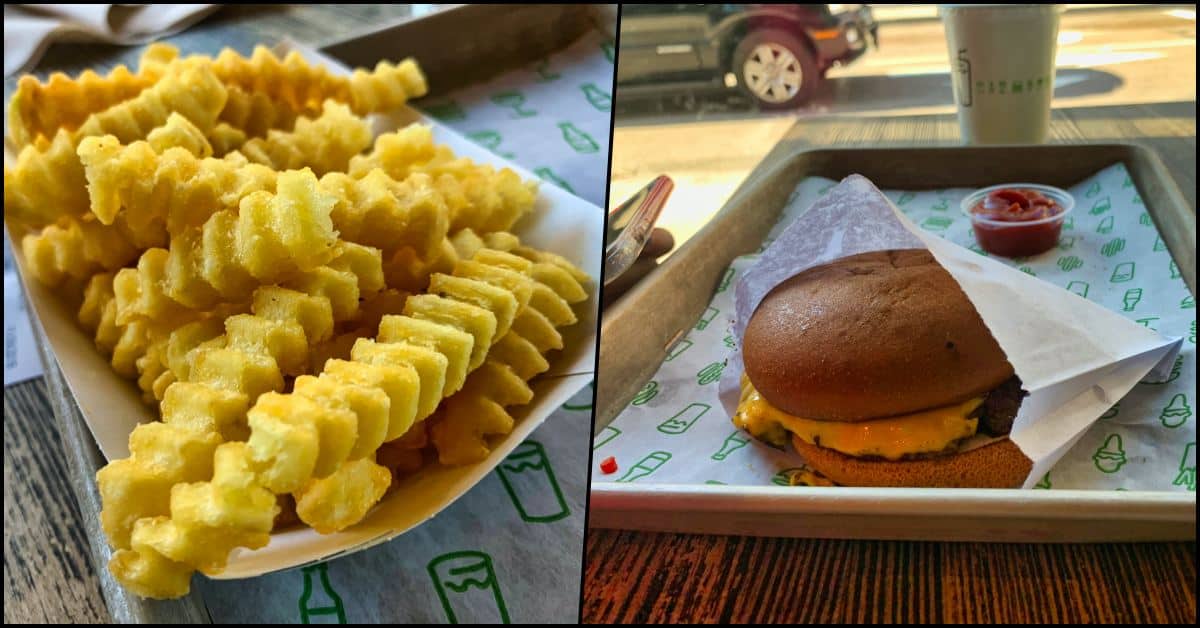 Earlier this month we stopped at the Seaport location for a late lunch. It was a very busy Saturday afternoon and a lot of restaurants were very busy.

We were very lucky to get a table after placing our order. The Seaport dining room is small - I suspect that most people use the take out during busy lunch hour.

They did have a Gluten-Free bun on the menu - so that made us happy. When we placed our order at the counter, we told the cashier that my daughter has Celiac. We wanted to know what the side options were. Were the French Fries cooked in a dedicated fryer?

He told us that it wasn't BUT he also told us that he was also a Celiac and said that the french fries were safe. He said that he has eaten it plenty of times and never encountered any issues.

So we took his word and order some french fried for my daughter. She seemed fine with the decision.

When we got our order she tried some of the fries and didn't like them. (I think she probably had second thoughts about it.)

We didn't encounter any issues with cross-contamination. Usually, when she gets some gluten she can be angry and in a mood. That didn't happen. She was a bit tired but most likely that was from all the fun playing around in the Seaport.

We'll go back to the Shake Shack again. It's a bit disappointing that they don't have much side options for gluten-free eaters.

Stew Leonard's is a small grocery store that claims to be the "Disneyland of Dairy Stores" and the "World's Largest Dairy Store." It's a fun place to shop and find all sorts of unique products.

The closest store to the Boston area is in Newington, CT - about an hour and 45 mins from Boston.

We visited the store back in April and was surprised to see "Gluten-Free" items promoted throughout the store. 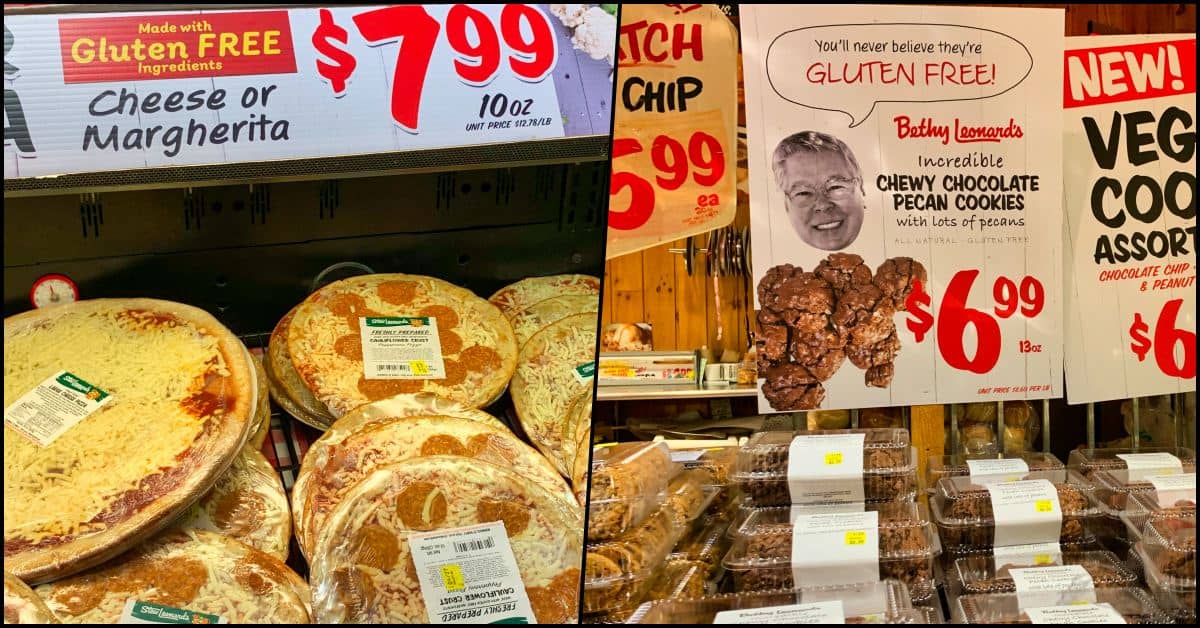 It's a fun store for kids. There are lots of distractions - it's certainly not a typical Stop and Shop grocery experience.

The Chewy Chocolate Pecan Cookies were so good! People may get turned off because it's "Gluten-Free." However, if you never tried a gluten-free product before - you should try this. Yes you would never believe that it's Gluten-Free.

We didn't try the pizza, but it's nice to know that they have a gluten-free "store brand type." The price is nice too! Next time we are visiting people, we'll have to stop in and pick up one to try.

Make Your Own Gluten Free Pizza

We are a big fan of the Gluten-Free pizza at UNOs. It?s really good and it?s a fun place to be

There's one cool thing that you can only get at Unos: 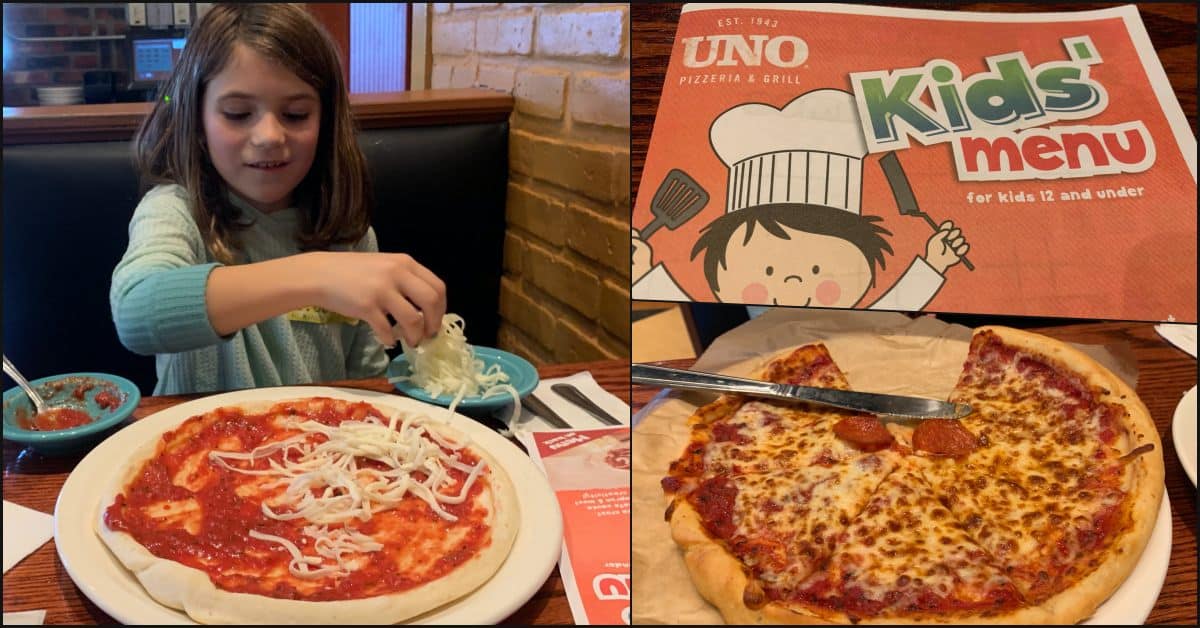 When ordering the kids ?Make Your Own Pizza,? make sure to ask for the gluten-free crust.

When we ordered ours at the Unos in Westborough, Massachusetts, the waitress was very good at makings sure to clean her hands and prevent any cross-contamination. Anytime that we asked for something with the pizza, such as more cheese she would excuse herself to wash her hands before taking any actions.

The pizza came out great and my daughter was delighted with the whole experience. She loved the pizza and more excited to come back.

I think her only "wish" was for more topping choices - tomatoes and olives are some of her favorites.

Last month we attended a function at Georgina's Italian restaurant in Berlin, Connecticut. This is the first time that we visited this restaurant, we were a bit nervous about their Gluten-Free options. 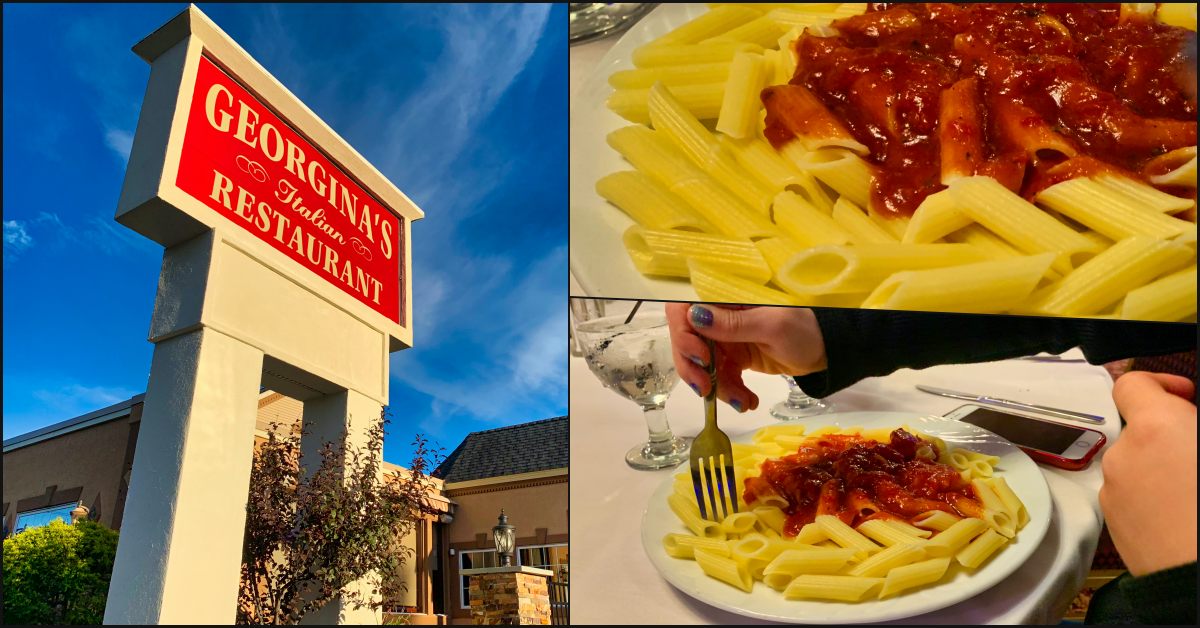 The people hosting the party at Georgina let the catering team know ahead of time of the allergy. They said that they would provide a separate gluten-free penne for my daughter.

On the day of the event, they were very accommodating as to the gluten-free options. They explained to us which buffet items she could have. However, before the meal was served, there was a Vege and Cheese tray with crackers - lots of potential of cross-contamination.

My daughter loved the Panne and ate the whole thing. She did have some of the vegetables that was available in the buffet. She didn't feel left out of all the fun because she was eating a different meal. (I think she was very happy to have the penne dish.)

We would recommend going here. They were very accommodating and their gluten-free pasta was very good.

In the general dining room, You can substitute gluten-free Penne for an extra $4.

We have been going to Burtons Grill & Bar in Framingham since it opened back in March. It's a great restaurant that has a lot of great foods on the menu. 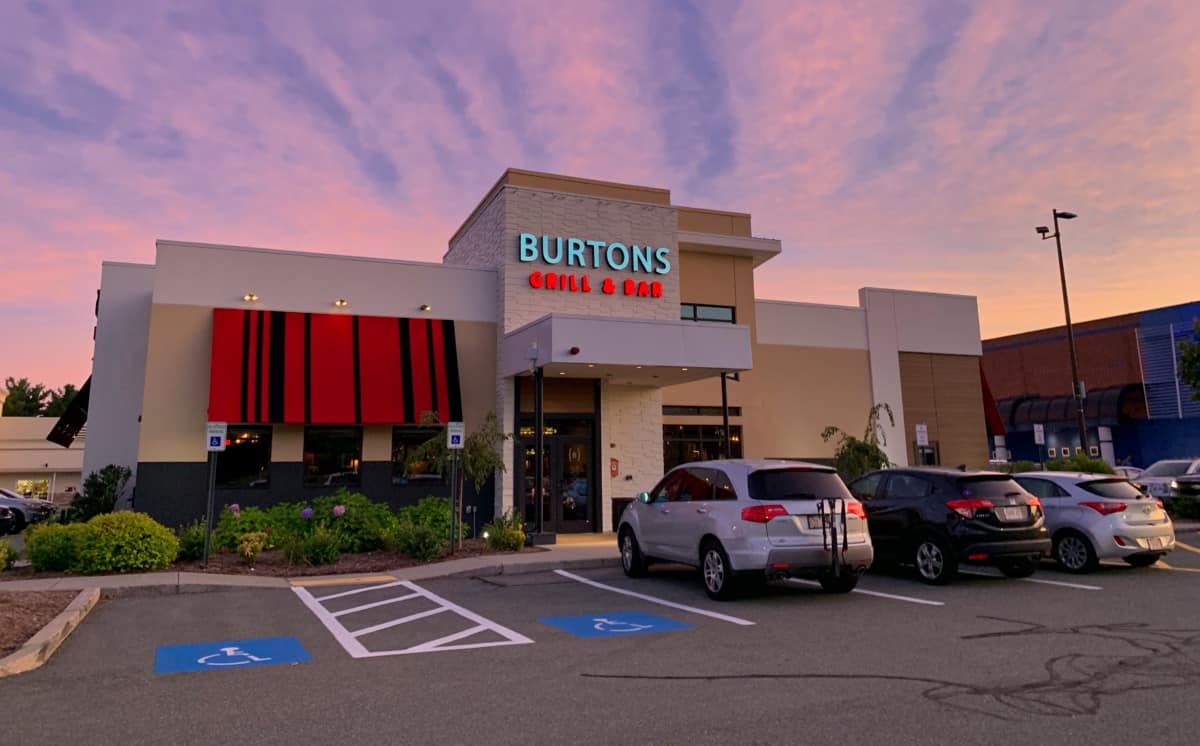 Burton's has a scratch kitchen - which means that they can change up any order to meet your needs.

Burton's has a very large Gluten-free menu that has a lot of options for every taste. Check out the menu online!

My daughter loves to get a cheeseburger and french fries - it's "not as good" as Smash Burger but she still loves it.

The General Tso's Fried Cauliflower is amazing and it's Gluten-Free! It's the go-to thing that we order every-time we come here. Sometimes we make it as part of our meal. (Ya, It's that good!) 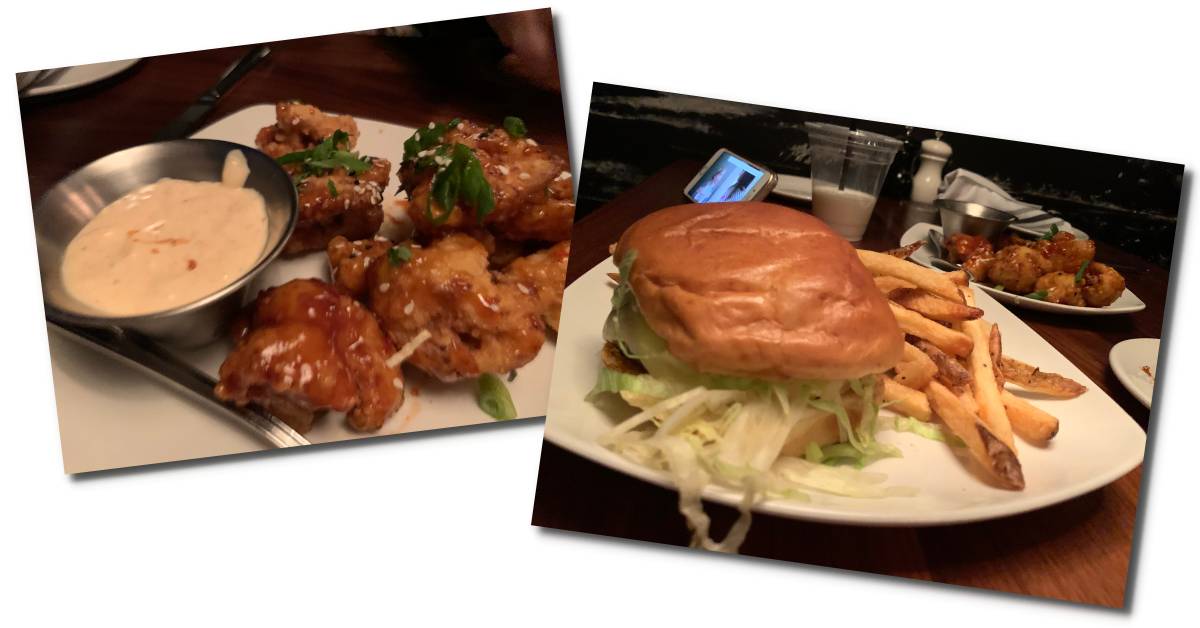 If your going to Burtons on a Friday or Saturday night - it's highly recommended to make reservations. They reserve a large number of tables for reservations. So if you walk-in you may see a lot of empty tables and expect a short wait - that won't be the case.

Early this summer the restaurant didn't get much traffic. However, the word is out and it's a very popular place now!

Burton's Grill & Bar is located opposite Shoppers World - next to Legal Seafood. The address is 30 Worcester Rd, Natick, MA 01760.