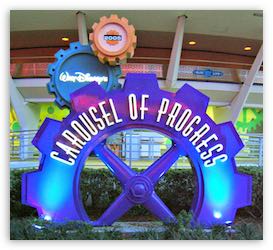 One of the oldest continuing attentions in Disney World is the Carousel of Progress which made its original debut at the 1964 World Fair. After the fair, it was moved to Tomorrowland Disneyland and stayed there until 1974. In 1975, it premiered in Walt Disney World.

The Carousel of Progress offers Disney guests a unique opportunity to sit in a moving theater and learn about how technology in the 20th Century has improved the American Family.

The entire show is just about 20 minutes long, which makes this a great place for little ones to rest for a bit. My 4-year-old daughter enjoyed sitting through the show and listening to the music.

The Carousel of Progress is a great place to head to when a sudden afternoon rain storm hits. Much of the waiting area is under cover and you won't have to wait too long to get in. If it's still raining after the ride, you can use the People Mover as cover to get something to eat or shopping.

Just about every seat in the theater is a good seat. I have found that the center seats in the back two rows to offer the best vantage point to see everything going on. If you want to look at the details sit in front row.

Photography and videotaping are not permitted during the show. I have been to a couple of shows where I got distracted because of the rear camera screen or the occasional flash photography. If you plan to film the show, please do it in the back row and learn how to take pictures without a flash.

Despite the no video recording policy, Disney Guest still managed to get some good quality videos on Youtube.

Here are some things to pay attention to on your next show:

A really cool thing that Disney did was to add a date to the Carousel of Progress sign in Tomorrowland. This allowed guests the opportunity to take pictures of the sign with a dated milestone of their trip. A few years ago the date was removed from the sign. It's not clear why Disney did this. Currently, there's no milestone landmark that guest can take as a traditional souvenir photo.

Filed under the "Disney" and "A-Z Challenge" categories.

Big changes this week over at KGO. Here?s the announcement from March 31st:

Cumulus Media announced Thursday, many KGO Radio and KFOG employees were laid off due to restructuring purposes.

Legendary talk show host Ronn Owens signed off from KGO Radio for the last time, but his fans will be able to follow him to another station.

When I lived in California, I enjoyed listening to KGO as I was traveling around the Bay Area. My office had a good radio signal and I would bring in my CC Radio and listen to all the things that were going on while I was working.

On the morning of May 1, 2002, KGO broke out of their traditional radio schedule to cover tall cranes that were being transported to the Port of Oakland from China. At the time, there was some concern that the cranes might be too high to go under the bridge.

Let's step back in time and listen to the KGO Bay Bridge coverage:

Filed under the "Media" and "A-Z Challenge" categories.

This past week, I turned on my PowerMac G3 and encountered the ultimate "Uh Oh" - I saw Apple's panic screen: 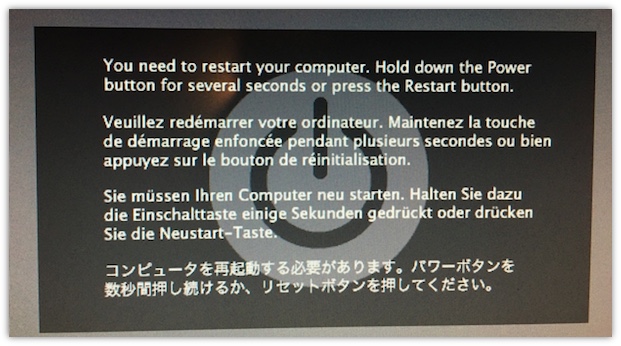 I restarted the computer a couple of times and kept getting the same panic screen. This is telling me that something is wrong with the hardware. (I'll need to reset the pram and that should get the computer up and running.

However, this got me thinking: I haven't used this computer in a long time, did I really back everything up? What about all those photos, audios? What is on this old computer? I am sure that I backed up the files, but where are they in my vast DVD collection? It's time to consider my backup strategy on some of my legacy computers and hard drives that I have around.

One thing that I will do, is to get a sheet of paper and an envelope and tape both of them to the computer. I'll write down what files are currently on the computer and in details. No more general labels like: "Photos from 2003." Instead, I'll write something like Fenway Park photos and photos from June 1st - August 4th, 2003. This will help me in the future to find critical photos that I might be looking for.

In the envelope, I have a 64 GB Sandisk Ultra Fit Flash Drive and all the critical files that are on the computer. No more spreading files over multiple DVDs. The flash drive goes for about $16 on Amazon and it has a lot of great reviews! 64GB may not seem like a lot but that's going to save me from search through 15 DVDs. Again, I am only concern about the top critical files that are worth saving on the Flash Drive.

Now I am cooking with gas!

By doing this, I'll have all the files in one place and it will be much easier to find the files I may need in the future. I think the best envelope to use is in this case is the Tyvek envelope. For additional protection, I could put the flash drive in a sandwich bag, that would help keep out any humidity from being in the basement.

Filed under the "Macintosh" and "A-Z Challenge" categories.