In New England, some people are heading to the beaches to enjoy the warm weather, others are heading around the Charles River to mark their spot for the Boston Pops Fireworks Spectacular.

This is a nice poem/article that was written 42 years ago to celebrate the bicentennial celebration of the country. 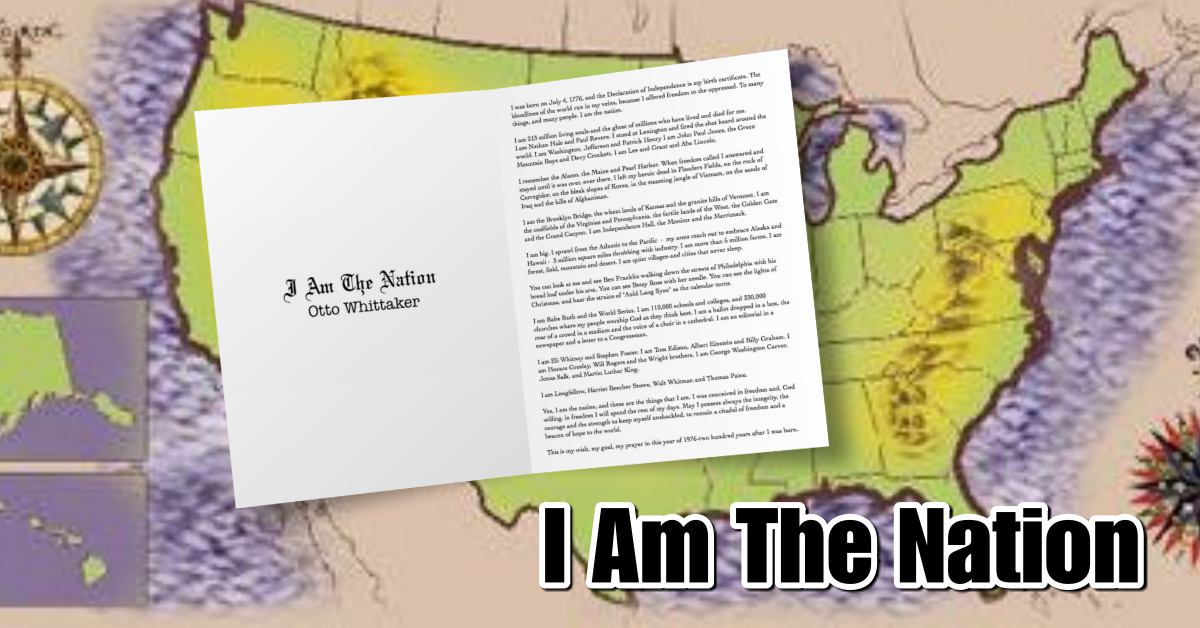 I am The Nation

OTTO Whittaker "I Am the Nation," as published on the front cover of the Norfolk and Western Railway Company Magazine on January 15, 1976.

Download a PDF version of the famous article - it's been reprinted many times and each year it get's read into the congressional record.

I was born on July 4, 1776, and the Declaration of Independence is my birth certificate. The bloodlines of the world run in my veins, because I offered freedom to the oppressed. Too many things, and many people. I am the nation.

I am 213 million living souls-and the ghost of millions who have lived and died for me.

I am Nathan Hale and Paul Revere. I stood at Lexington and fired the shot heard around the world. I am Washington, Jefferson and Patrick Henry I am John Paul Jones, the Green Mountain Boys and Davy Crockett. I am Lee and Grant and Abe Lincoln.

I remember the Alamo, the Maine and Pearl Harbor. When freedom called I answered and stayed until it was over, over there. I left my heroic dead in Flanders Fields, on the rock of Corregidor, on the bleak slopes of Korea, in the steaming jungle of Vietnam, on the sands of Iraq and the hills of Afghanistan.

I am the Brooklyn Bridge, the wheat lands of Kansas and the granite hills of Vermont. I am the coalfields of the Virginias and Pennsylvania, the fertile lands of the West, the Golden Gate and the Grand Canyon. I am Independence Hall, the Monitor and the Merrimack.

I am big. I sprawl from the Atlantic to the Pacific - my arms reach out to embrace Alaska and Hawaii - 3 million square miles throbbing with industry. I am more than 5 million farms. I am forest, field, mountain, and desert. I am quiet villages-and cities that never sleep.

You can look at me and see Ben Franklin walking down the streets of Philadelphia with his bread loaf under his arm. You can see Betsy Ross with her needle. You can see the lights of Christmas, and hear the strains of "Auld Lang Syne" as the calendar turns.

I am Babe Ruth and the World Series. I am 110,000 schools and colleges, and 330,000 churches where my people worship God as they think best. I am a ballot dropped in a box, the roar of a crowd in a stadium and the voice of a choir in a cathedral. I am an editorial in a newspaper and a letter to a Congressman.

I am Eli Whitney and Stephen Foster. I am Tom Edison, Albert Einstein, and Billy Graham. I am Horace Greeley, Will Rogers, and the Wright brothers. I am George Washington Carver, Jonas Salk, and Martin Luther King.

Yes, I am the nation, and these are the things that I am. I was conceived in freedom and, God willing, in freedom, I will spend the rest of my days. May I possess always the integrity, the courage, and the strength to keep myself unshackled, to remain a citadel of freedom and a beacon of hope to the world.

This is my wish, my goal, my prayer in this year of 1976-two hundred years after I was born.

Filed under the "Misc" category.