One of the most essential tool that any above ground pool owner should have is a container on Vinyl Cement and some extra vinyl strips.

You never know when something might puncture your pool, such as a branch from a tree or having a rock bullet through the pool wall from a lawn mower. Chances are that your local pool shop may not be open when it happens, and if so, would they have any of the patch equipment available?

I recently found that Lowes or Home Depot doesn't carry any Vinyl Cement, or any type of adhesive that would work under water. Home Depot does carry some pool supplies, including a patch kit, but again they may not have it in stock, plus you would be paying a premium price.

At Central Pools in Framingham, you can get the Vinyl Cement for about $10 and they have extra vinyl patches samples that you can take for free. Leslie's Pools only carries small patch kits and they don't have the Vinyl Cement container.

I would recommend keeping these inside the house instead of in a garage or shed. I had an old patch kit but the vinyl cement had dried up. Just keep them so you know where they are in an emergency.

Another essential thing to have on hand is an extra pool hose. This can come in handy if your pool hose should suddenly spring a leak. We have encountered some leaks with our hoses and have had to replace them. This can happen when you use the same hose over many years.

If there's anything else you think should be in the kit, please drop me a note and tell me! An above ground pool needs a really good Inline Chlorinator to automatically inject chlorine into the pool every time the filter runs. This is simple way to to remove contaminants from the water held in the pool. Some people like to use a floating Chlorinator, but I think an Inline is the best way to properly mix chlorine into the entire pool.

Last year we had a problem with our old Inline Chlorinator as their was a crack in the main body and it was leaking. I had to rush to Leslies Pool and pick one up. Usually when your in an emergency situation, you don't really do much comparison shopping, as I picked the only Inline Chlorinator that they had in stock - Super Clear Inline Chlorinator.

This turned out to be much better than the old one that we had, which had to be at least 5 years old. I really like how easy it is to open the top and put in Clorine. The old one would get stuck and would take great efforts to remove the top. I would use such great force that I would get blisters just trying to open it. Now it is very simple to open as I just push a lever and twist off with ease.

When setting up an Inline Chlorinator to an above ground pool, make sure to have a valve to cut off the water flow. You'll need this to stop any back flow that may happen, usually when shutting down the pool, or fixing a leaky hose.

The Inline Chlorinator is an easy way to get chlorine in a pool opening up for the season. The Super Clear model allows you to adjust the amount of Chlorine and this complements any Shock strategy. Just remember to double check the Chlorine levels and don't forget to turn down the Chlorine levels.

It really doesn't matter what size chlorine tablets you use. I have used both the "giant" size and the regular size. They both work just as well. I usually buy whatever is on sale, or has the best value for the number of chlorine tablets in the container.

We stored the Inline Chlorinator in the basement of our house. Before putting it downstairs, I made sure that the water was fully drained out of the container, I then rinsed the container out really well and left outside to dry. Once it was done, I put the top back on. I did this since I didn't want any of the Chlorine smell in the house and our cats to get into it. You should never leave the Chlorinator outside during the winter. 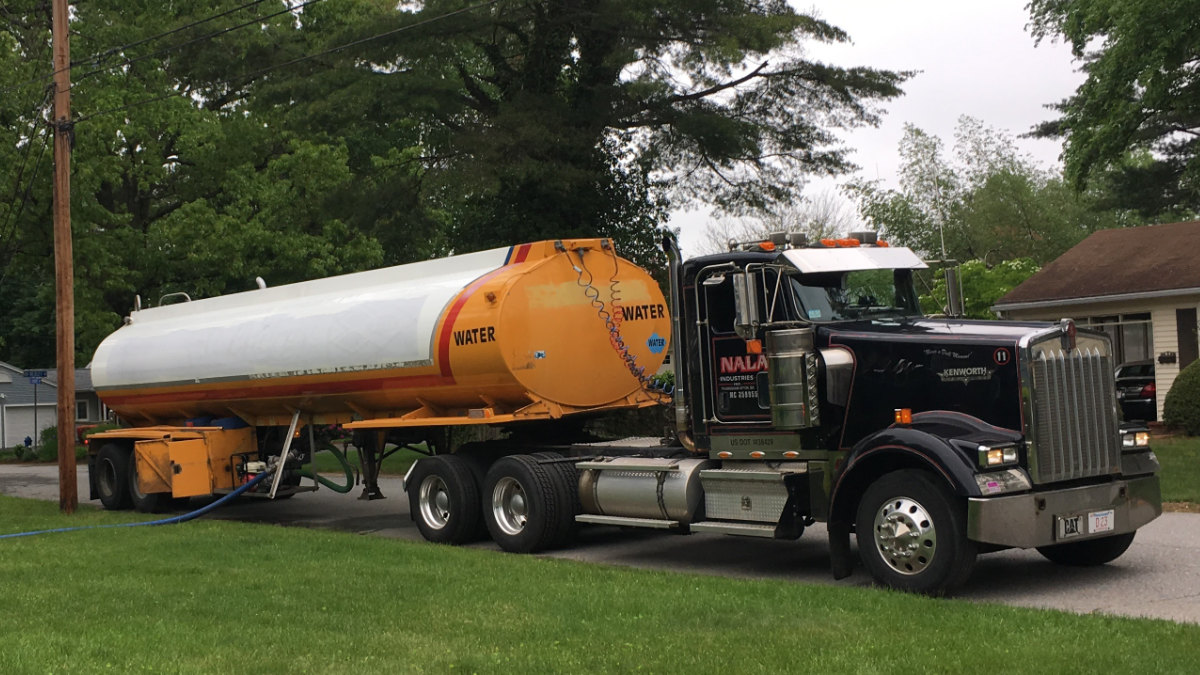 There are many companies that offer Bulk Water services to the Framingham area. Most people need this service for filling up a pool. If you have bulk water needs you should contact all the companies for pricing and availability.

We recently use Nala Industries Inc. for our water deliver, they were able to provide service within 24 hours of calling and they were really helpful to get the water in the pool as quickly as possible.

Tip: Make sure to measure how far it is from the street to your pool. Since they will have a large truck, in most cases, they won't be able to go down a driveway. If you measure the distance before the truck arrives, they will be able to get the correct hose size. 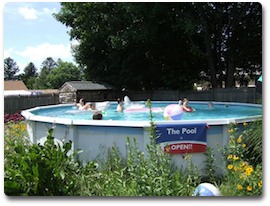 Another way to Calculated (Method #2)

The 24 foot Round Above Ground Pool will most likely have walls that measure 52" but only hold 48" or four feet of water. It has a flat bottom with a slight angle in the middle but usually not much to impact the calculations.

You can clearly see how important it is to know the depth of your round pool. In our situation, the pool depth is 47", which makes our pool volume 13,287. I have 8" of water in the pool which means that the pool now contains 2,276 gallons and we are awaiting 9,000 gallons of water from NALA. When completed, our pool will have 11,276 gallons, and we will top it off so that we can use the pool this weekend.

Some other useful facts: