Here?s the latest update on the four major professional sports.

The NBA will tentatively resume play on July 31 with 22 teams in the field. Games will be played in Orlando Florida.

Players will have to be in "lockdown" in Orlando as they finish off the postseason with no fans in the stadium. The idea is to isolate the teams to prevent any exposure to COVID-19.

The New York Times is reporting that not all players are happy about the Orlando option - especially with the Black Lives Moment in full swing. Some players want to continue to have a voice in the movement and may sit out the season.

Rudy Gobert was the first NBA player to test positive for COVID-19. He tested positive on March 13, 2020. Got to love this tweet:

Before leaving a post-practice interview session, Rudy Gobert touched all the tape recorders that were placed before him on a table. He is now the NBA?s Patient Zero for coronavirus after becoming the first player in the league to test positive. https://t.co/eKXF7Ymw0f pic.twitter.com/EQXRfy73nO

Training camps for the 24 NHL teams resuming play will open July 10. The 2019-2020 season will resume with only Stanley Cup qualifying teams.

One thing complicating the comeback is that an unnamed Boston Bruin player has tested positive for COVID-19. (This is the first know case among the Bruin's team.)

The Boston Bruins have the best season record when all play was stopped on March 12th because of COVID-19.

The NHL plans to have 24 teams return with a chance to win the Stanley Cup, eight top clubs playing each other to determine seedings while the bottom 16 meet in eight playoff qualifying series.

The 2020 season is uncertain - players rejected the latest contract negotiations as they wanted more pay for the short season. The league office has said that asking for more with no fans in the stadium is not realistic.

The Major League Baseball Players Association has asked MLB to go ahead and schedule the start of the MLB season. They have asked for plans by June 15th.

Once an official schedule has been announced, players will return to "spring training" to get ready for the 2020 season. The season would start at least 3-weeks after the spring training.

The MLB has publicly reported that multiple players have recently tested positive for the virus. The league has not filed any reports on what baseball would look like once play has resumed.

NFL season is currently scheduled to start on time. There are rumors that they plan to have fans in the stands during preseason games.

He said that one key thing is that the NFL would have to do an abundance of testing and be willing to sideline key players if they test positive.

Last Thursday the organizers of the Boston Marathon made the tough call and canceled the 2020 Marathon. In March, the marathon was rescheduled from April 20th to September 14, 2020. (147 days delay)

This is the first time in the 124-year history that the marathon was canceled. The yearly event ran during the great depression, World Wars, snow and rainstorms.

Essential this means that any large events that are being held in the summer of 2020 are not going to happen.

Boston politicians were worried about the pandemic spread with the large gathering of spectators. They wanted to avoid a "second wave" much like what happened in the 1919 pandemic.

Over the past five days there has been protesting all over the country - including in major cities around New England. Local media have been showing the large crowds gathering in front of the Massachusetts State House.

When I look at the footage, I wonder what the impact will be of the mass gathering. Will, there be a spike in COVID-19 cases or is such a gathering not going to be an issue since a majority of people are wearing masks.

If there is no spike reported in the next seven days, it could be a positive sign of a return to normal. Maybe it's simple enough to have masks on to help reduce the spread.

Companies that have office space in Boston were allowed to open up this past Monday.

Wouldn't you know it.. traffic reports returned to the local media stations - radio and tv.

However, a lot of companies are encouraging workers to continue to work from home. There are two main reasons:

It will be interesting to see what Phase 2 will bring and how the mass gatherings impact the regular numbers.

One of the big surprises in Massachusetts phase one reopening is that house of worship can now open. There are some important rules that they must follow - at least in phase one.

This is a surprise as many churches expected to stay close through much of the summer. 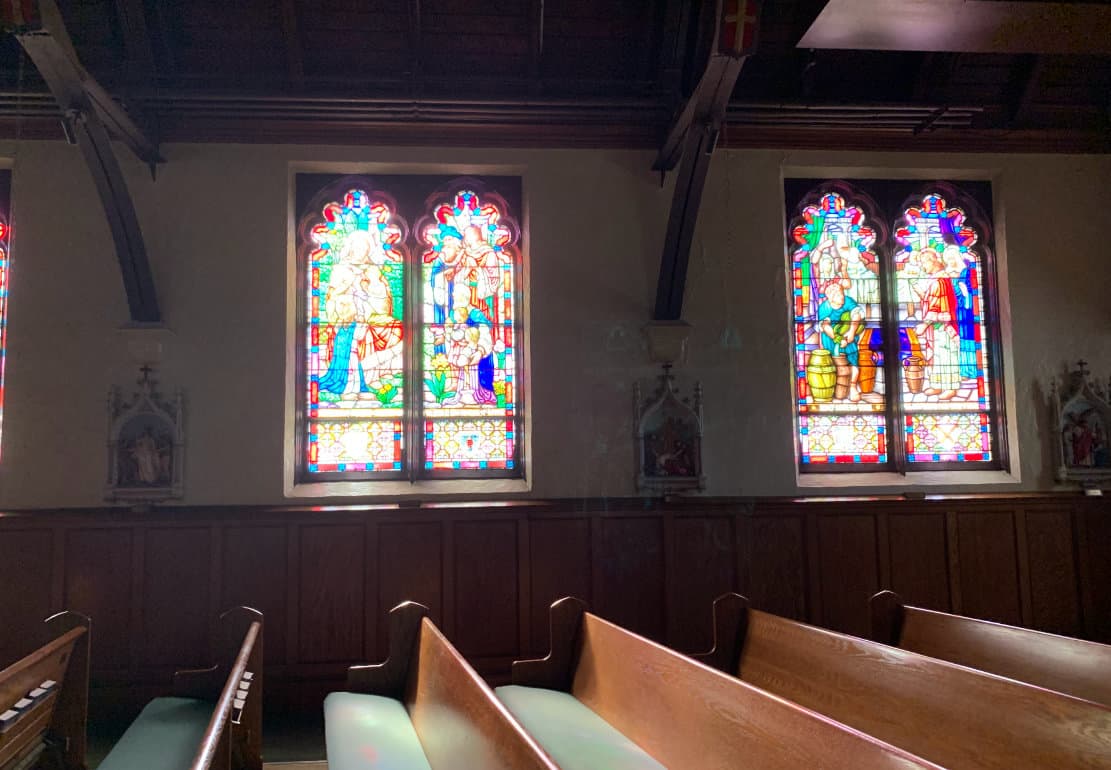 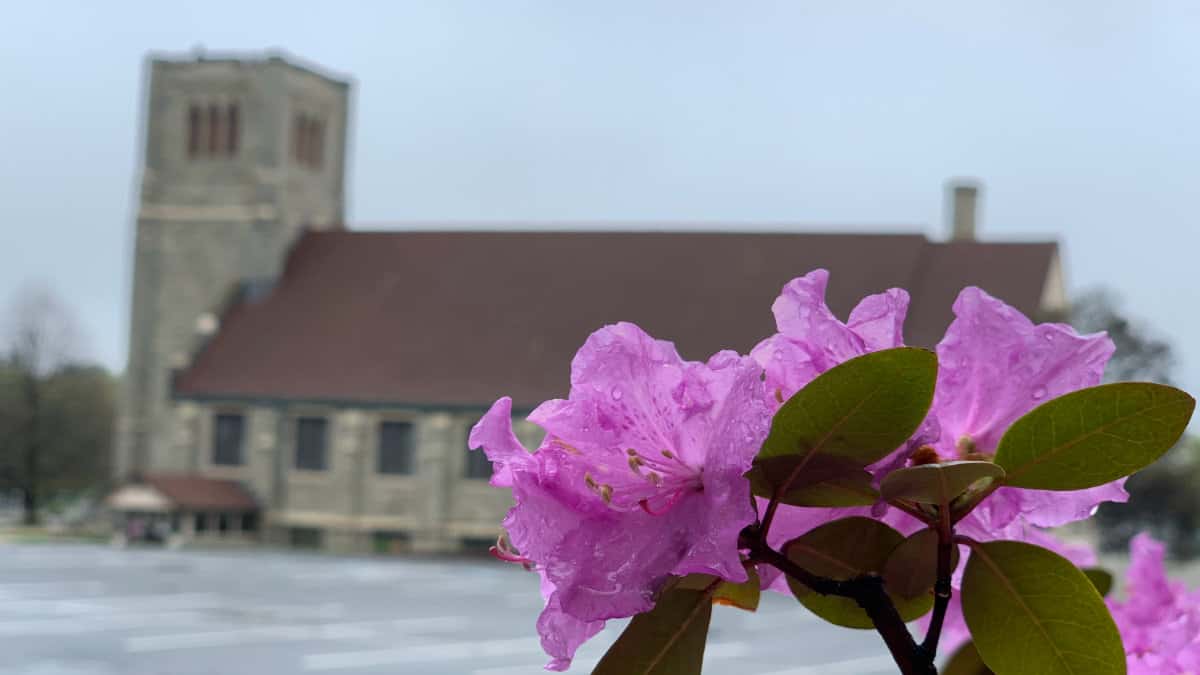 Many churches are excited to get parishioners back. However all the rules and restrictions are likely to defer people from attending services.

Most parishioners are older and in the key group of people that need to be careful about attending public events. They are likely going to stay home and continue to watch services via Livestream.

Churches take a risk because if a parishioner is later found to have the virus then the church will have a deep cleaning and that could cost thousands of dollars.

Yesterday Massachusetts Governor Charlie Baker formally announced the four-step process to reopen Massachusetts to the new normal. Each step of the process should last for 3-weeks.

This means that Massachusetts will be back to the new normal around mid-July.

Starting on June 1st, Boston Office Workers can return to their offices - but only at 25% capacity. Major companies are asked to encourage workers to work from home. Prior to yesterday's announcement, several companies have made announcements to that effect:

Fifty-four companies in Massachusetts agreed to keep their employees home long after the restrictions are lifted. This will help the MBTA from being crowded and

Changes around the Office

There's an old saying, "You can never go home again." Well for the thousands of workers that spent time working from home over the past few weeks, the office isn't going to be the same.

As part of the new normal, there will be a lot of changes around the office. Here are just some of the changes recommended by the CDC:

Full information on the Safety Standards for Office Spaces is available on the Mass.gov website.

The MBTA plans to resume a modified FY20 full schedule in phase 3, which is about 6-weeks from now. This modified schedule most likely will mean no express trains.

Prior to Phase 3, the MBTA Commuter Rail will on a reduced schedule and then add additional trains in Phase 2. Currently there are only 4 trains that run in the morning,

I would expect that commuters would be waiting until after the July 4th holiday weekend to start taking the train back in - at least those that plan to visit the office.

Last week, I blogged about how Massachusetts Commuter Rail would return to near normal by the end of October.

This was assuming several events would happen that would help build confidence for commuters to ride the commuter rail.

Last week the Greater Boston Chamber of Commerce made public the presentation "The Massachusetts Way Forward." This is a 27-page document that covers various topics:

It's a good read on what the barriers are with reopening and some of the concerns that businesses have with moving forward.

Reasons Why Commuters May Avoid the Commuter Rail

It's expected that the commuter rail may limit the number of passengers. This may cause some train delays going to/from Boston.

This is a quick content change up for the Month of May, and possibly June. COVID-19 has been the top story since early March and I thought it was about time that I added some content here about the whole Corona Virus situation.

Since March 13th, the MBTA Commuter rail ridership has dropped approximately 80-90%. This is due to the the "Stay At Home" advisory and many Boston Commuters working from home.

Last week I posted a graphic where I predict how the volume of traffic on Massachusetts' MBTA Commuter Rail will change over the next few months.

This chart shows the percent of ridership on the MBTA Commuter Rail. Whereas it was 100% in January 2020. 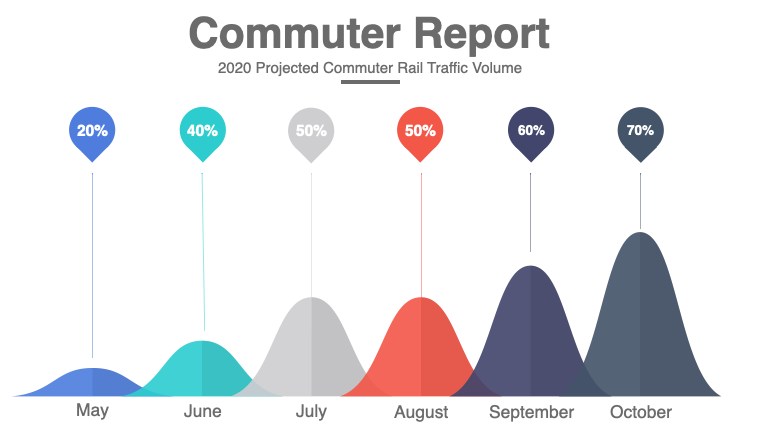 Here are my thoughts on the logic:

May - 20% Ridership - The "Stay at Home Advisory" will be lifted on May 18th, I don't think there will be much change for commuters going into Boston.

June - 20% Ridership - More people will start to take the commuter rail, but a lot of people will be working from home. Partly because schools are still in session until mid-June. Many summer camps will not be opened - making things difficult for parents.

July - 40% Ridership - More people will be heading into the city - but only a few days. I suspect most people won't be buying Monthly passes. Certainly, I would expect to see more people working from home on Fridays. Major League Baseball will be playing and that will help build confidence in people to venture out to work.

August - 50% Ridership - Back to School season. Some Colleges may start the Fall season with distance learning and target to reopen their campus in the Spring. This is why I predict that July and August numbers to be the same. More sports and summer camps should be running. Commuters will start heading into the office more frequently. Monthly Ticket passes sales should increase.

September - 60% Ridership - I suspect that people will have more comfort to riding the train with masks and taking "off hours" to work. I predict that toward the end of the month, a vaccine will be approved and pushed through by the FDA. (While many experts think that it may take several years, I think the timeline will be shortened.)

October - 70% Ridership - This is about as good as it gets for a while. The vaccine is being widely distributed to major hospitals around the world. Companies will be encouraging employees to return to their offices. Some workers may choose to work from home on more frequent bases.

What Do you Think?

What do you think? Do you agree with my timeline? Is it too aggressive?

I know there's some talk about some companies only bringing 30% of their workforce in at a time. I predict that it will happen for a short duration as things get figured out at work and people get adjusted to the "new normal."